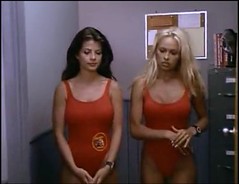 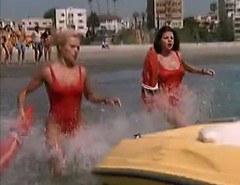 Dolls in black and white 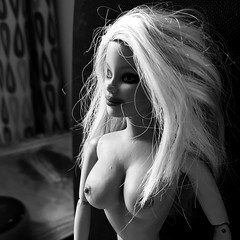 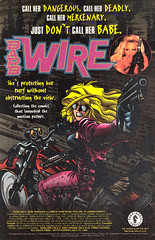 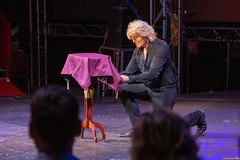 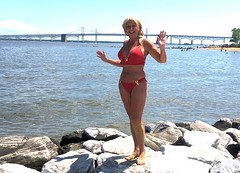 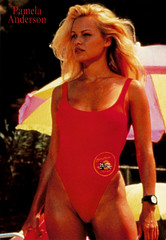 Sexy Canadian-American actress and model Pamela Anderson (1967) is best known for the TV series Home Improvement, Baywatch and V.I.P., but the platinum blonde but naturally born brunette also appeared in a dozen of feature films and on a record 14 Playboy covers. Furthermore she is an international celebrity thanks to her rocky marriages, her animal rights activism and her changing bust sizes.

Pamela Denise Anderson was born in Ladysmith, (Vancouver Island), BC, Canada, the daughter of Barry Anderson, a furnace repairman, and Carol (née Grosco) Anderson, a waitress. She was the first Canadian baby born in Ladysmith on Canada's Centennial Day in 1967, A Centennial Baby. As a child, Anderson suffered frequent sexual abuse, a fact she revealed publicly in 2014: she was molested by a female babysitter from ages 6 to 10, raped by a 25-year-old man when she was 12, and gang-raped by her boyfriend and six of his friends when she was 14. She also revealed that her father, though "loving", had been an alcoholic. Anderson attended Highland Secondary School in Comox, British Columbia. During high school, she played on the volleyball team. She graduated in 1985. In 1988, 19-years-old Anderson moved to Vancouver and worked as a fitness instructor. In 1989, Anderson attended a BC Lions Canadian Football League game at the BC Place Stadium in Vancouver, where the stadium camera featured her on the electronic scoreboard while wearing a Labatt's Beer T-shirt. The fans cheered her and she was brought down to the football field. Because of her fame in Vancouver, she signed a commercial contract with The brewing company to be the Blue Zone girl. More advertising assignments followed. Anderson appeared as the cover girl in Playboy magazine's October 1989 issue. She moved to Los Angeles to further pursue a modelling career. Playboy subsequently chose her as Playmate of the Month in their February 1990 issue, in which she appeared in the centrefold photo. Anderson then elected to have breast implant surgery, increasing her bust size to 34D. She famously increased her bust size again, to 34DD, several years later. Anderson has since appeared in Playboy several times in the 1990s and the 2000s. Anderson's Playboy career spans 22 years, and she has appeared on 14 Playboy covers, more than any other model. Anderson was the last to pose nude in Playboy, on the magazine's January/February 2016 cover. She also became known as lifelong animal rights and human advocate and is also an activist for environmental issues. In 2006, she posed naked in the window of Stella McCartney's store in London to protest against the use of fur in making clothes.

After Pamela Anderson moved to Los Angeles, she won a minor role as Lisa, the original ?Tool Time girl?, on the television sitcom, Home Improvement (1991-1993), starring Tim Allen. She left the show after two seasons and won the role of lifeguard C. J. Parker on Baywatch (1992-1997), the action drama series about the Los Angeles County Lifeguards who patrol the beaches of Los Angeles County, California, starring David Hasselhoff. She played C.J. for five seasons making her one of the longest-serving and most popular cast members. This has been her best-known role to date and she later reprised her role to return in a reunion movie, Baywatch: Hawaiian Wedding (Douglas Schwartz, 2003). In 1994, she was cast in her first starring film role, in the action thriller Raw Justice (David A. Prior, 1994), co-starring with Stacy Keach. She also appeared in Naked Souls (Lyndon Chubbuck, 1996), starring Brian Krause. Next, she starred in the action-Science Fiction film Barb Wire (David Hogan, 1996), based on the Dark Horse comic book series of the same name. The thinly-veiled futuristic remake of Casablanca was poorly received by critics, bombed at the box office and resulted for Anderson in a Golden Raspberry Award for her interpretation. In 1998, she came back as Vallery Irons in the TV series V.I.P. (1998-2002) about a bodyguard agency (V.I.P. aka Vallery Irons Protection). Blending action and humour in a fast-paced adventure series, with Anderson often poking fun at her tabloid image, the show explored the exciting and sometimes treacherous lives of the rich and famous. The series lasted through a successful four-year run. In 1999, Anderson had her breast implants surgically removed. The breaking news seemed like the end of an era.

Pamela Anderson married Tommy Lee, drummer of Mötley Crüe in 1995, after knowing him for about 4 days. They wed on a beach, with Anderson in a bikini. Anderson's mother did not know, and learned of the marriage from People magazine. A sex tape of Anderson and Tommy Lee on their honeymoon was stolen from their home in 1995 and made a huge stir on the Internet. Anderson sued the video distribution company, Internet Entertainment Group. Ultimately, the Lees entered into a confidential settlement agreement with IEG. During this time, she was known professionally as Pamela Anderson Lee. Together they have two sons, Brandon Thomas Lee and Dylan Jagger Lee. The couple divorced in 1998. In 2000, Anderson became engaged to Swedish model Marcus Schenkenberg, but they broke up in 2001. In 2004, Anderson became a naturalized citizen of the United States, while retaining her Canadian citizenship. She became engaged to the singer Kid Rock (Robert J. Ritchie), and they married in 2006. Later that year Anderson miscarried while shooting a new film, Blonde and Blonder (Dean Hamilton, 2006) with Denise Richards. Seventeen days later, Anderson filed for divorce. In 2007, Anderson married Rick Salomon in a small wedding ceremony at The Mirage, between her two nightly appearances at the Planet Hollywood Resort and Casino in Hans Klok's magic show. The couple separated later that year and Anderson requested through the courts that the marriage be annulled, citing fraud. In 2014 they remarried and also divorced again in 2015. Her film work in the new millennium consisted mainly of cameos in such comedies as Scooby-Doo (Raja Gosnell, 2002) with Freddie Prinze Jr. and Sarah Michelle Gellar, and Scary Movie 3 (David Zucker, 2003), part of the franchise that parodied the horror, sci-fi, and mystery genres. In 2004, she released the book Star, co-written by Eric Shaw Quinn, about a teenager trying to become famous. Her second book, the sequel Star Struck (2005), is a thinly veiled look at her life with Tommy Lee and the trials of celebrity life. Anderson appeared in the mockumentary, Borat: Cultural Learnings of America for Make Benefit Glorious Nation of Kazakhstan (Larry Charles, 2006), as the title character (Sacha Baron Cohen) becomes obsessed with her and plans to abduct and marry her. She appears as herself at a book signing at the end of the film, confronted by Borat in a staged botched abduction. The film opened at No. 1 at the US box office, maintaining a first place for two weeks straight. More recently she co-starred in the independent film The People Garden (Nadia Litz, 2016), a Canadian-Japanese drama starring Dree Hemingway, and she returned in a cameo as the older C.J. in a new film version of Baywatch (Seth Gordon, 2017). It starred Dwayne ?The Rock? Johnson, Priyanka Chopra and Zac Efron and the tagline was: Don't worry, summer is coming. Recently, Pamela Anderson appeared in the erotic magazine The Amorist in new pictures by photographer Rankin for a new ad campaign for an erotic lingerie brand. The Daily Mail Online commented: ?Time may well be a cruel mistress, but Pamela Anderson goes some way towards proving the years have been kind in a stunning new photoshoot.?

SALT & PEPPER
CJ Swimsuit @ Fameshed
Rocking this Bay Watch style and saving my poor hubby from drowning, The kiss of life was hot!
The suit can be wet or dry, with or without waterdrips and has a logo patch that you can customise.
Interactive swim suit comes in sizes: Lara / Lara petite / Legacy / Legacy Perky/ Reborn.
It reacts to SL default water and turns wet, dries in the sun, it also works with any Aqusense items like the S&P shower, water gun and collabs like the the Aquasense pool from Kraftwork. The swim suit and the rescue can are sold separately

The facade of a three-storey house on a busy road in an inner Melbourne bayside suburb.
Featuring the face of actress Pamela Anderson, designed and built for a former football star, and the object of controversy (and architectural awards) since it was completed in the year 2000.
Architect: Cassandra Fahey
St. Kilda West, Melbourne
2016 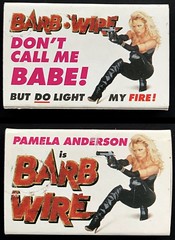 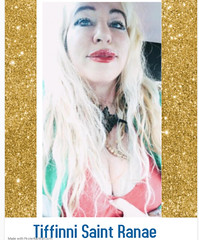 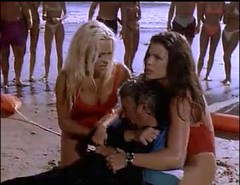 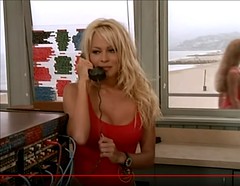 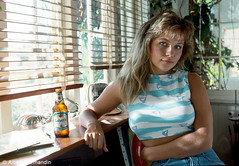 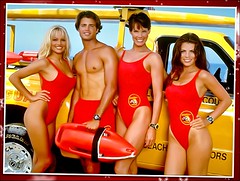 Out in the woods on a snowy winter day ?? 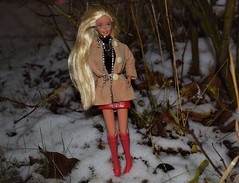 Hi! I haven't been here in a looong time... I don't know if any of my followers/ flickr friends are still out here, hope I can reach at least somebody with this post.
Even if I haven't done doll photography in a long time, I still have & love my dolls ?? And yes, I will actually gift myself some for this year's christmas, maybe cause 2020 has been quite rough after all. Dolls are and will always be something that cheers me up. I wish you all a very happy christmas season and I hope to hear from you again. Lots of love
-MHperfectlyimperfect 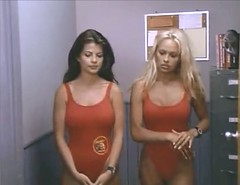 A visit to Canterbury Cathedral in Canterbury, Kent, England 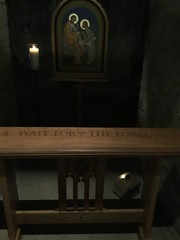 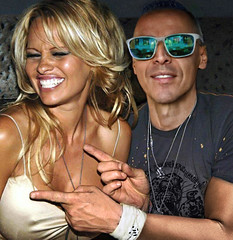 Live From The 405 Podcast posted a photo: 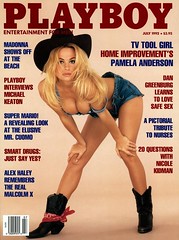 I mean, cmon. How hot was she for god's sake. And look at the episode tie-in: "Alex Haley talks about Malcolm X??" CMON! I think this was right before Baywatch and during her run on Home Improvement. I probably lost 7lbs jerking off to Pam Anderson from like 1993-1998. God bless that woman.